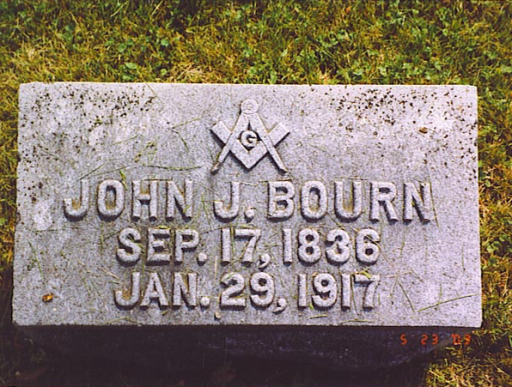 John J. Bourn, a well to do farmer and stock dealer of Scotland County, Missouri and a resident of Miller township, was born in Howard County, Missouri on September 17, 1836.  Son of John D. and Nancy Higbee Bourn.  It is thought that the father was a native of Fayette County, Kentucky.  He died in Scotland County, Missouri in the year 1878 at the age of 84 years.  He came from Lexington, Kentucky to Howard County at a very early date and was one of the counties early settlers.  In 1841 he moved to Scotland County where he followed the plasterer's trade for some time.  He then turned his attention to farming and to the office of Magistrate, having been elected to that office, which he held for several years.  His father was a soldier in the Revolutionary War.  The mother of our subject was a native of Fayette County, Kentucky and at the time of her death which occurred in July, 1868, was 67 years of age.  She was the daughter of Joseph Higbee, a native of Germany who came to America before the Revolutionary War and took part in that memorable struggle.  The parents of our subject were members of the Missionary Baptist Church and to their marriage were born eight children.  He received a fair education in the schools of Lewis County, Missouri and Davis County, Iowa.  At the age of 21 he left his parents and began to improve the property he now calls home .  He remained a resident of Scotland County until 1865 when he made a tour Westward and worked in the mines near Virginia City, Montana.  Since 1867 he has made Scotland County, Missouri his home.  On the 24th of February 1860 he wedded Miss Adeline Stewart, a native of Ohio, born September 9, 1839 and died in November 1861.  She was a daughter of William Stewart and was a member of the Missionary Baptist Church.  To this marriage was born one son, James E. on January 24, 1864 our subject married Julia A. Buford, a daughter of Henry P. Buford.  She was born in Schuyler County, Missouri April 10, 1844 and by her marriage became the mother of two children, both sons; Robert H. and J. D..  The former is deceased.  Our subject is a Free Mason, is a decided advocate of the Democratic platform, and he and his wife are members of the Missionary Baptist Church.